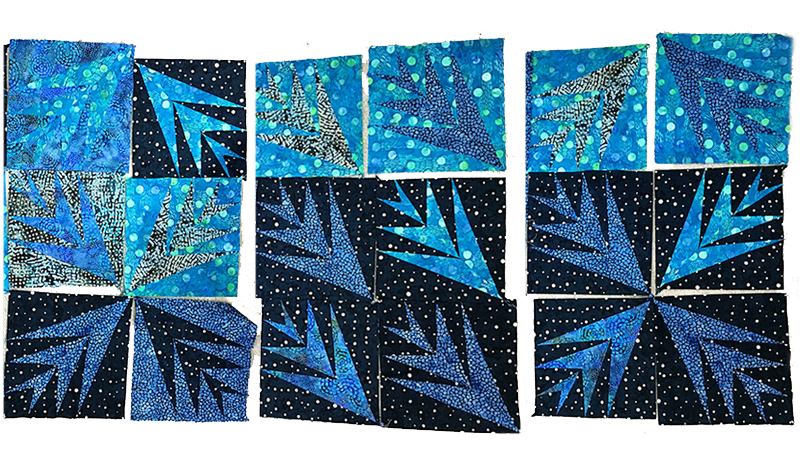 
Several months ago I became fascinated by a series of quilts featuring an old traditional block called the "Palm Leaf."  It’s one of those blocks that when you rearrange how the blocks relate to each other, you get incredibly different looks!  Swoon!

I decided that although I am not a traditional quilter, I wanted to make a Palm Leaf quilt of my own!  So, I drafted a pattern and then sent it to my ScanNCut for cutting (this way there was not a single moment of measuring or math -- my kind of quilting).

I chose to cut all of the pieces out of commercial blue batiks I had sitting around.  I made 12 blocks -- each about 12x12.  I experimented with various arrangements and these were my 3 favorites:

In the end, I picked the third arrangement.  I surprised even myself with this choice.  It wasn't anything I had in mind when I made the blocks, but when looking at the photos I decided that it was the most pleasing to my eye.

In putting the quilt top together, I made another shocking -- even to myself -- decision.  I added sashing and a border!

I don't think I've ever made a quilt before that had sashing... but that's the wonderful thing about making things -- you can always make a new choice!

The next hurdle: quilting this beast on my little domestic machine... eeek!  I’m nervous and excited about it.  This is probably the largest quilt I’ve tried to quilt yet!

Talk to you later!

Creating A One of a Kind Quilt Block

Create a Quilt Card with ScanNCut

Behind the Scenes at The B2B Brother Dealer Conference