Dealers Experience a Once in a Lifetime Incentive Trip

Brother dealers
couldn’t have imagined the customer trip that awaited them as they arrived in the ancient city of Prague this past June. Over 100 attendees from the United States, Latin America, Central America and South America flew to the Czech Republic for six days to explore and tour this quaint historic walking city.

Prague is located in the new Czech Republic. In 1993, Czechoslovakia was divided into two independent nations, the Czech Republic and the Slovak Republic. The history is so rich and dates all the way back to the fourth century. The first night welcomed the dealers and their spouses (who were a little weary from traveling). They enjoyed a welcome dinner at Pilsen Hall, where everyone was treated to local delicacies, including Prague’s well-known beers.

Brother surprised the dealers by entertaining them with a Dulcimer Band, comprised of traditional dancers and Bohemian-costumed characters. There were many new dealers in attendance who were able to meet other dealers with the same dreams and aspirations. All tours, dinners and experiences were paid by Brother as part of their annual ‘Thank You’ to those who were “at our side” during the previous year. Brother is known in the industry, not just for its innovative products and outstanding marketing, but for having some of the most lavish and unique dealer trips. What was so exciting for many dealers was the fact that they qualified for the trip without having to be among the largest sellers of Brother products
.

The group wasted no time as they spent their days exploring and touring Prague and its neighboring cities. As always, Brother dealers were offered a number of tours to choose from, with different events offered each tour day. Some parts of the group opted for more active tours, such as the Segway through Prague and the Mountain Biking Rally. Other attendees preferred visiting more cultural and historical places, such as the Terezin Concentration Camp, Prague Castle, Communism Museum and Plzen Brewery. Several dealers followed their creative appetites by learning about glass blowing, painting and marionette-making. One day was set aside to bring the group together for a private and memorable experience at Nelahozeves Castle. The castle, owned by one of the most famous families in Prague, was transformed exclusively for the group into a “Czech Medieval Day.” The stone courtyard was filled with local artisans, traditional food vendors, beer and wine tastings, a costumed photo booth, and a demonstration of medieval weapons and fighting techniques. Many of the dealers understood that they were “no longer in Kansas.”

Music For Their Ears 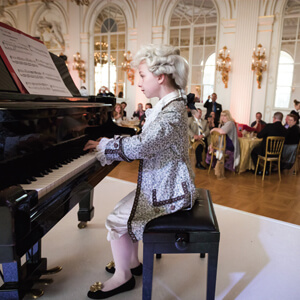 In typical fashion, Brother rented the Rudolfinum Symphony Hall on the second night and turned the venue into a dinner theatre that evolved into a night club. Everyone was entertained by Trio Inflagranti, Prague’s all-female electric violinist group, who played music that ranged from Mozart to Metallica. Absolutely amazing. The third night was even more special, as everyone enjoyed a delicious dinner at Hergetova Cihelna while relishing in the breathtaking views of Prague and the renowned Charles Bridge. After sunset, the group gathered for a spectacular fireworks show over the Vtlava River. Dealers marveled at the show, as thousands of local visitors stood on the bridge and enjoyed the wonderment in the sky. A fireworks show is a signature event held at most Brother events. The final evening was Awards Night, which honored those Brother dealers who had worked all year selling what many believe are the most innovative and profitable products in the industry. The event was held in Rudolph’s Gallery, a private part of Prague Castle that is not open to the public. Planned with a Mozart theme, Brother embraced Prague’s musical roots and orchestrated a night to remember. Many dealers realize that Prague was Mozart’s favorite city (not Vienna or Salzburg). The night began with dealers being swept off their feet and treated like royalty, as each couple was transported by a vintage car from the hotel to the stairs of the castle. They were then greeted by traditionally dressed men and women, a 10-piece classical orchestra, and minuet dancers. The entertainment continued throughout dinner with special performances by three acts. The group was charmed by the first performer, “Little Mozart” (dressed in a white powdered wig and Mozart garb). The second act was a pair of soloists who sang arias from Don Giovanni. The evening ended on a high note with an awe-inspiring set by the Pop-Opera trio, La Gioia, who were the finalists in “Czech’s Got Talent". What a way to finalize what dealers stated was a “once in a lifetime” incentive trip! The dealers were also eager to try their best to attend next year’s trip to Iceland. Dean F. Shulman hosted the event and looks forward to seeing all of them again in Iceland in 2017.

Oops, something went wrong. Please fill in the required fields.

Your comment has been submitted successfully and will be reviewed shortly.