Bring the magical characters of Wonderland to your own Mad Hatter Tea Party. With your Brother sewing & embroidery machine
you can create a fantasy linen tea set for a special little girl’s birthday--or for her unbirthday! Have tea with Alice, the White Rabbit, the March Hare, and more of Disney’s Wonderland personalities, all machine embroidered on a tablecloth and napkins. A tea party is a great opportunity to discuss manners, hospitality and the rules of polite conversation with children. Meanwhile, you can learn about Madeira applique’, pinstitch, the exclusive My Custom Stitch from Brother and a handy technique for wrangling square corners into curves at the hemline.

1. Download the PDF of the Madeira curve templates HERE for both the Napkin and Tablecloth, and cut from cardboard or quilting template plastic Download: Alice in Wonderland Madeira Template
2. Cut corner curve from 5"x5” heavy white card stock. Use a simple curve like a jelly jar. [caption id="attachment_1513" align="aligncenter" width="800"]

Making corner curve template[/caption] 3. Starch and press all fabric until it is crisp. The tea linen set will turn out ever so much nicer if the fabric is very stiff. Spray starch, press, spray starch again and press once again. This gives good results.

AUTHOR'S NOTE: Practice and experience gained from stitching the napkins pays off when tackling the larger tablecloth project. Trust me on this.

1. Press each 4” colored linen in half diagonally. 2. With washable pencil, trace napkin Madeira template on to linen. Make certain the template point is at diagonal fold point before you trace with the pencil. If such a pencil is not available, a #2 pencil is preferable to water soluble. Using such a water soluble marker for this step may make the lines difficult or impossible to remove after the upcoming combination of iron heat and applied water. [caption id="attachment_1681" align="aligncenter" width="800"]

Folded corner, template, pencil[/caption] 3. Attach open toe foot then stitch on drawn line with water soluble thread, regular stitch length. NOTE: Use these features if they are available on your machine-- needle down, knee lift and camera with laser light to show needle entry point. Stitch slowly to reduce thread breakage. 4. Cut a scant ¼” above stitched line. Clip curves and be sure to clip the fold to the stitching line. [caption id="attachment_1685" align="aligncenter" width="800"]

Corner with water bottle[/caption] 7. Press immediately, placing the iron on the corner piece. Do not move the iron, just press UNTIL ABSOLUTELY, POSITIVELY DRY or you will be really sorry . Then turn it over and press again. 8. Open folded corner gently. If there is resistance, carefully clip one or two stubborn threads to release the seam line. [caption id="attachment_1693" align="aligncenter" width="800"]

Opening corner[/caption] 9. Press opened Madeira corner and set aside. 10. REMOVE WATER SOLUBLE THREAD AND STORE IN AIR TIGHT CONTAINER. An empty spice jar or small plastic bag works well. This is so easy to forget but very important. I once inserted a sleeve with this water soluble thread. Totally unaware of my mistake, I rinsed the markings out of the dress and the sleeve fell out. Groannnnnnnnn… 11. Press ¼” to inside of white 8” napkin. If the white napkin was well starched (and it really needs to be—if it is not, starch it again), it can be finger pressed and then ironed. This saves your fingers from being burned as you make that little ¼” fold and press at the same time. [caption id="attachment_1520" align="aligncenter" width="800"]

Corner stitched, rounded, trimmed[/caption] 17. Clip curves and turn to right side of white napkin. Clip into ¼” fold on each side of Madeira corner. [caption id="attachment_1526" align="aligncenter" width="800"]

Madeira corner turned ¼”, clip[/caption] 18. Press ¼” folded edge to wrong side. Baste around white napkin, through the blue Madeira corner and across top of that corner. Alternatively, the entire baste area can be secured with a glue stick. It is important to have all held in place before you begin pinstitching along those edges.

** Also known as Parisian hemstitch This is such a classic and useful stitch. Traditionally, pinstitch secures a hemmed edge or joins lace to the edge of fabric. Its use at the top of the Madeira appliqué corner is expected, but the finish on the edge of the napkins and tablecloth is unique. It is worth studying the sequence of this stitch then practicing and mastering its uses. OPTION: If you are short of time, the linen edges can be nicely finished with an heirloom roll and whip or a shirttail hem. An appliqué stitch across the top of the Madeira corner could hold it in place. [caption id="attachment_1526" align="aligncenter" width="800"]

Madeira corner turned ¼”, clip[/caption] If you are sewing on a machine other than the Brother sewing/embroidery machines listed above, choose your pinstitch carefully. It should look like this diagram. Don’t be fooled by the appliqué stitch with a similar appearance.

Pinstitch advances forward and backward 3 times into the same two needle created holes. It goes forward once more into the second hole created. Next the needle reaches 90 degrees into the adjoining fabric, lace or into the air and returns to the hole it just left. It continues in this manner.
TEA LINEN NOTE: The repeated forward backward stitches which create holes are always worked into the white linen and only into the blue or colored linen at the bottom of Madeira corner curve. At the top of the Madeira corner, the forward backward stitches are in the white linen and the “reach” stitch goes into the blue corner. You will need to mirror image the stitch when you change direction. Look closely and you will see that the “reach” stitch is clearly visible in the blue linen at the top of the Madeira corner. At the bottom, the “reach” stitch goes beyond the fold leaving the pinstitch holes in the blue linen.
[caption id="attachment_1706" align="aligncenter" width="800"]

Pinstitch holes up and down[/caption] 1. Set both stitch width and length to 3.0. Practice on a scrap with a fold. If there is any puckering, reduce the tension and/or use narrow paper or strip of water soluble stabilizer. Do not use regular tearaway stabilizer. The fine thread will be damaged when the stabilizer is removed. Stitch first over a folded edge of linen and then over colored linen stacked on folded linen—4 thicknesses—to evaluate whether adjustments to stitch length and/or width are necessary. [caption id="attachment_1530" align="aligncenter" width="800"]

Pinstitch rehearsal, open toe foot[/caption] Begin pinstitching the napkins once the stitch pattern is familiar. 2. Pinstitch from lower edge of Madeira corner over scalloped top, creating holes in the white linen. When the top curve is complete, pivot, mirror image stitch pattern to place holes in blue linen, adjust the position of the fabric to go on around bottom edge of corner. Continue around napkin perimeter along the route as shown in image below. [caption id="attachment_1533" align="aligncenter" width="800"]

Pinstitch route[/caption] 3. Trim excess fabric from behind pinstitched hem. Do not cut away behind the Madeira applique’. Curved snips work well for this job. [caption id="attachment_1590" align="alignright" width="800"]

Trimming behind pinstitch[/caption] 4. Press well after trimming.
Editors Note: Janice is a wealth of information. For more information on the pinstitch, she has a wonderful post HERE
on her own blog, Janice Ferguson Sews
that's chalk full of even more pinstich information!

For Disney’s Alice in Wonderland linen tea set, characters for the napkins were paired with colored linen. Each design center should be marked as indicated, measured from the bottom of the center Madeira curve. NOTE: In order to coordinate with the Madeira corners, embroidery threads vary from the colors indicated in the Disney embroidery design. Also note that the Disney trademark was stitched once only, on the Alice napkin. 1. Press napkin in half diagonally from Madeira corner to top of napkin. Then press flat. Crease will still be visible. 2. Load the 8 Alice in Wonderland designs in to machine. 3. Select Alice file #AIW03 4. Place snowman sticker for design center above center curve, as in listing above. For this particular Alice, the design is centered 2 ¾” above the lowest decorative curve on the Madeira corner. Without snowman function, draw vertical and horizontal lines to mark design center. Extend lines to edges of napkin for more accurate placement. [caption id="attachment_1532" align="aligncenter" width="800"]

Snowman and measurement on napkin[/caption] 5. Attach embroidery unit and embroidery foot. 6. Open Alice file AIW03. Edit to include basting frame as close as possible to the perimeter of the design, so as to add no height to the design. [caption id="attachment_1531" align="aligncenter" width="800"]

Alice design on screen with basting frame selected[/caption] 7. Hoop tearaway stabilizer in 4x4 frame. Spray back of napkin with temporary adhesive and place on frame with snowman centered. The napkin must be carefully centered as the design is 94.5 mm in a 100 mm frame. If you’re a just-in-case person, hoop in a 5x7 frame so there is room to position the design, “just in case” the napkin was not exactly centered when it was basted. 8. Use snowman function to locate design center, then remove sticker or center design on marked cross hairs. [caption id="attachment_1534" align="aligncenter" width="800"]

Snowman icon on Brother’s THE Dream Machine[/caption] 9. Embroider Alice. NOTE: Do not allow basting frame stitches to penetrate pinstitching as they might be damaged. Advance the stitch pattern one stitch at a time until the frame has passed the pinstitches.

After adding tatting to the corners, apply seam sealant in these areas[/caption]

This exclusive feature on certain Brother machines opens a world of creative possibilities. In My Custom Stitch I created a zig zag patterned feather stitch for use on baby blankets and other items. If you would like to use this My Custom Stitch as shown on the tablecloth, it can be downloaded for FREE here
. I used the 3 mm size but it could be widened to 3.5 or 4.0. However, the directions below are specifically for the 3 mm MCS. Because the size of the Disney Alice in Wonderland embroideries varies, the distance between them also varies. By centering 16” of My Custom Stitch zig zag feather stitch between each embroidery it is possible to begin and end each 16” run of the zig zag feather My Custom Stitch with a complete pattern, a complete inverted V. Alternatively, another decorative stitch could be used. [caption id="attachment_1592" align="alignright" width="800"]

Zig-Zag feather sewn out[/caption] My Custom Stitch cannot be mirrored. So the zig zag feather must be stitched with the bulk of the tablecloth to the right of the needle. I know, I know--this is not where the bulk is normally placed while stitching. But you can do this, I’m sure. [caption id="attachment_1711" align="alignright" width="800"] 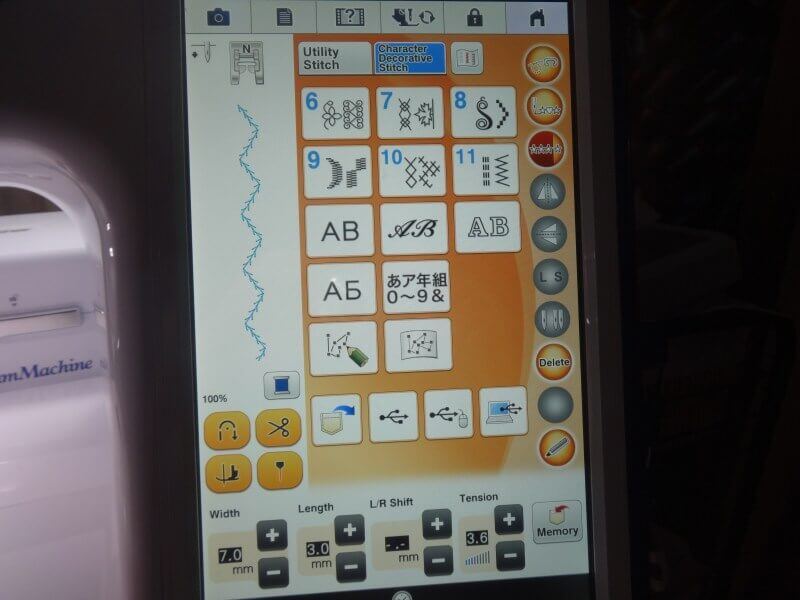 Rinse out all markings and press tablecloth. Invite a few children for tea.