I have a gorgeous Brother Dream Creator VQ2400 machine
. I ALSO have a gorgeous 6 year old daughter. Put together in bowl and mix! (oh wait...sorry...I've been watching too many of those cooking video shorts on facebook.) But seriously, I really do want my daughter to learn to sew. It's an essential part of my life and I want to share it with her. However, teaching a small child to sew can be be...dare I say...a bit of a challenge. (I get points in heaven for every time we work together.) In a moment of love and insanity, a group of 8 or so moms who specialize in quilting, got together from around the country and devised a plan to get our little ones to sew. The kids at the start aged in range from 5 - 9 I'd say, and some of those moms had 2 kids they were working with each time! We put together a fantastic quilting bee called "Not Your Mama's Bee" and let each child pick out a quilt block that they wanted the other kids to make for them. There *may* have been some guidance on the moms' part for these blocks as some kids were particularly ambitious (paper pieced Harry Potter blocks?! no). It's been a great year and we all had different goals with each of our kids.

My daughter and I (have I mentioned she is strong willed?!) had a bit of a struggle through the first few months because she was sewing on my lap. And she was DEFINITELY wanting to sew on her own. But she couldn't reach the pedals. Then I had an idea that I should have had from the beginning. Use the Pedal-less feature!!! I never use it myself because I'm such a control freak with my pedal speed. But for a little one, it was one less thing for her to worry about. Just take off the pedal and put the speed on a low setting. And she was off and sewing in no time. Freedom for both of us! I adore this machine for her...which is about the size of her!...because it has so many fantastic features with the buttons. I didn't realize how great those buttons would be for her, but let's face it, in this day and age, kids are totally comfortable tapping a screen or button to get what they want. She does still like to do things manually at times, but who doesn't love a needle threading button or a presser foot lift button? [caption id="attachment_3031" align="alignright" width="800"]

And my girl was not just sewing, she was quilting! Nothing like making her work on a 1/4" seam allowance right off the bat. I'm such a mean mama. LOL But if she can do that then she can do anything! And she IS working with cotton fabrics that cling to each other, so that helps a lot. [caption id="attachment_3025" align="alignright" width="800"]

Hmmm....I really should have made her redo her nail polish for this. Just keeping it real. Sewing with a six year old looks like this, pink fabric and all. [caption id="attachment_3026" align="alignright" width="800"]

She's always so stinking proud of herself in the end. We are all smiles when it is done, but I'll admit that we can both get a bit tense with each other while the sewing is going on. Her attention can wander easily and soon that 1/4" looks like a wave of thread. Oh and just for the record, I do not, at this point, allow her to do any of the rotary cutting or ironing. She can pin and sew, but I do those other steps. After all...she is only six. [caption id="attachment_3027" align="alignright" width="800"]

And we often work on arranging the block into the correct orientation. I will deliberately lay them out without the pattern correct and have her figure out where the pieces should be to add a little spacial understanding too. 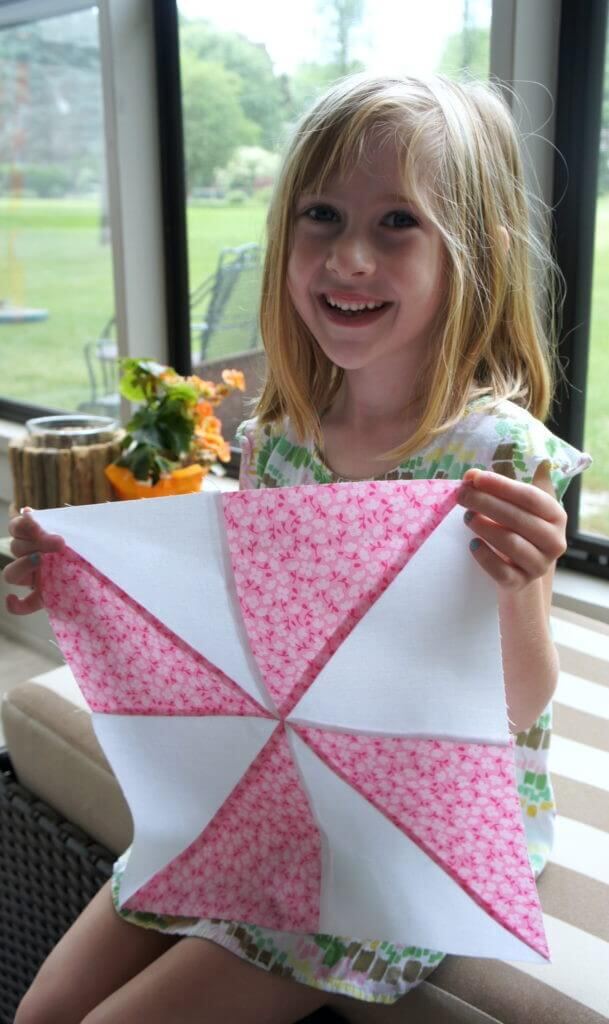 Then, eventually she has a completed block! She's helped me sew dresses for her and made her own pillow case. And she does have one piece that she can sew all on her own...I don't give a hoot about the seam allowances and she can just sew whatever she wants. So she's piecing together a little improv pillow. I like to think that she is getting the best of both worlds with precise sewing and improv. She does some hand sewing as well, which she adores. But, most of all, I'm just happy to see her at a sewing machine and becoming familiar with fabric. She's not afraid to chop into fabric and just create!

Back to School Kids Sewing