That was the motivating question at the Brother Back to Business event in Orlando Florida last week as the sewing industry leader launched a bevy of new machines, accessories and software to a capacity crowd of dealers, vendors and staff. As the opening videos and dazzling lights entertained, the full house anxiously awaited the presentation of the new product line and judging by their response; they were not disappointed. [caption id="attachment_16763" align="aligncenter" width="800"] 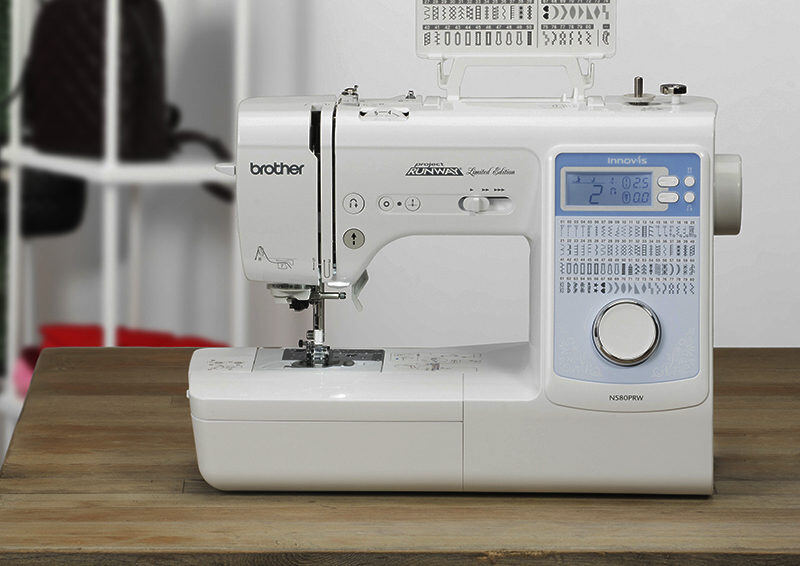 NS80PRW[/caption] First up was the compact and powerful Innov-ís NS80PRW.
Brother is touting this as the perfect travel companion for sewers on-the-go. Brother Sews Ambassador and frequent Stitching Sewcial contributor Angela Wolf introduced the machine with a fun video showing off the machine’s ease of use and simple portability. One of the great features of the NS80PRW is the longer J foot and feed dogs that create an ultra-smooth sewing experience with consistent stitching along with the advanced needle threading system and bright LCD screen. Other highlights include 80 built-in sewing stitches, including 8 one-step auto-size buttonhole styles and an ample 4.1" x 6.4" work area that helps you to easily work on projects while maintaining a portable footprint. The NS80PRW is the perfect mix of powerful, portable, and affordable. [caption id="attachment_16756" align="aligncenter" width="656"] 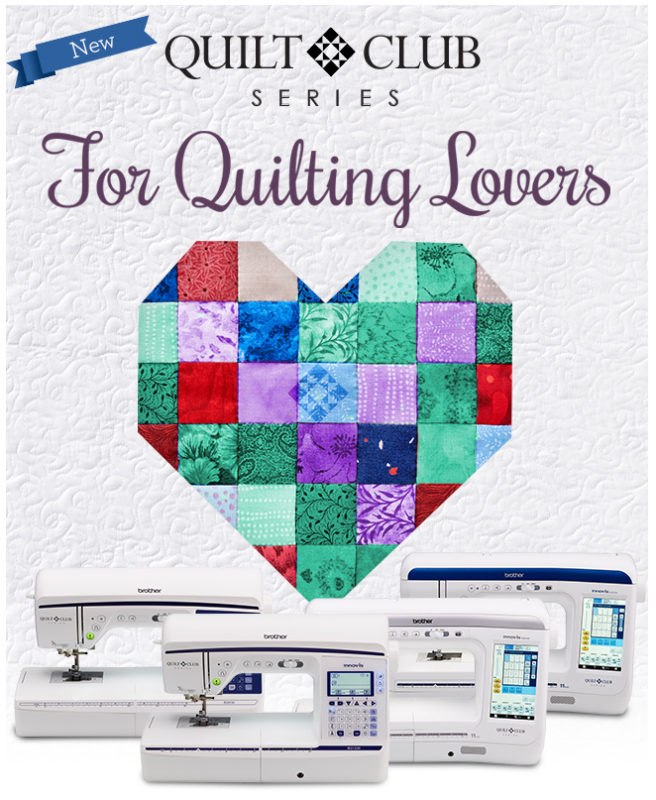 Quilt Club Series[/caption] The Quilt Club Lineup of machines were introduced next. The versatile Innov-ís BQ3050,
BQ2450,
BQ1350
and BQ950
all have features that will help take your quilting to the next level. The BQ3050 has the Sew Straight Laser Vision Guide that makes it easy to sew straight lines as well as an included wide table that will expand your workspace even more! The BQ2450 has advanced features like the MuVit Digital Dual Feed – a motor-driven foot – and smooth, easy pivoting with the Pivot Function which makes this the ideal machine for working on quilts or any project with thin or layered fabrics. The affordable BQ1350 has 290 built-in sewing stitches while the BQ950 has 10 styles of one-step auto-size buttonholes and is 8.3" from needle to arm. [caption id="attachment_16765" align="aligncenter" width="800"]

Simplicity Series[/caption] The overhauled Simplicity Series
received some considerable attention as the Simplicity® SB3150,
and Simplicity® SB1000T
were both announced. The SB3150 has features like a crisp, bright LCD screen display which shows the stitch pattern number, the digital stitch length and width control, which makes it easy to sew fabric at the precise point you need a stitch. And the SB1000T has 100 built-in sewing stitches, including 8 styles of one-step auto-size buttonholes. Both machines are feature packed and can virtually make sewing fun and exciting, and all at an affordable price! [caption id="attachment_16728" align="aligncenter" width="800"] 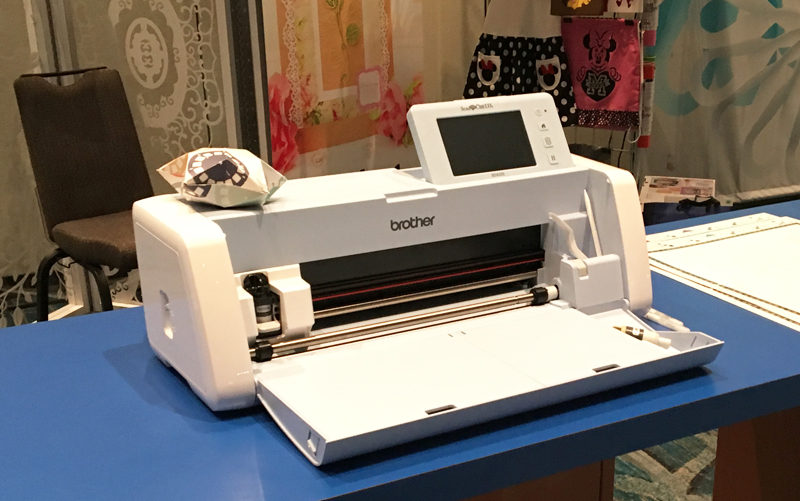 ScanNCut DX Innov-ís Edition SDX225[/caption] For the crafting crowd, the new ScanNCut DX Innov-ís Edition SDX225
collected a positive response. The innovative ScanNCut DX is the only home and hobby cutting machine with a built-in scanner and has a new revolutionary Auto Blade feature that can detect the height (thickness) of the material so you do not have to adjust the blade depth before cutting. In addition to that, the blade can cut up to 0.1” (3 mm) in thickness, cut a wide-variety of materials* like foam and felt virtually effortlessly. Along with being ‘whisper quiet,’ the new Roll Feeder allows you to tackle large projects with ease. [caption id="attachment_16738" align="aligncenter" width="800"] 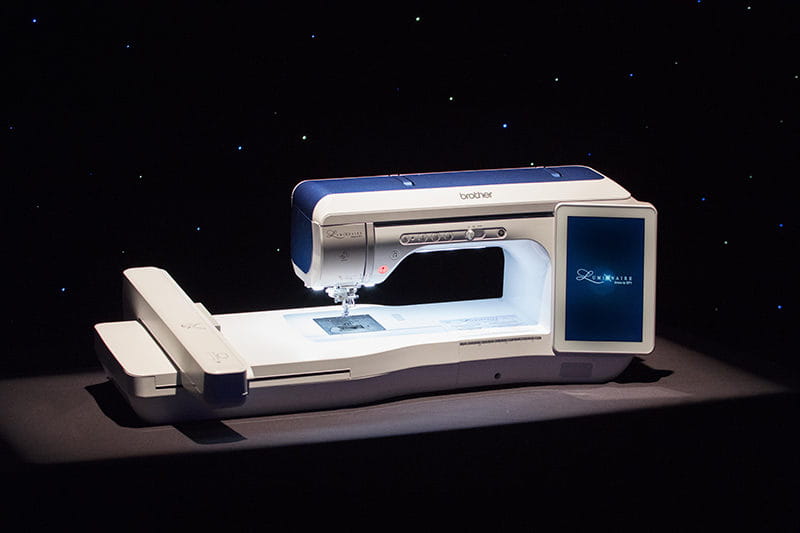 Innov-ís Luminaire XP1[/caption] Lastly, the machine that everyone was waiting for was unveiled - the new and exciting Innov-ís Luminaire XP1.
Brother is touting this as the ‘new star in the sewing machine world’ and ‘a machine that will make you shine’ and the crowd was in awe. The inventive Luminaire XP1 has revolutionary features such as StitchVision Technology which enables you to preview, audition and edit designs and stitches directly on the fabric through an intelligent beam of light. It also offers several guidelines and an embroidery pointer for pinpoint accuracy for needle position. The innovative tablet-like operation of the Capacitive Touch Screen Display allows you to swipe, pinch in and out, and scroll right on the screen. The One Action Needle Plate enables you to easily remove the needle plate without the aid of a screwdriver and the improved Innov-Eye Plus Technology has a 4 times wider viewing area. All this combined with the largest hoop ever Brother has ever offered (10 5/8” x 16” and with an ergonomic Spring Lever Release) and the largest workspace in Brother history (13.1” needle to arm span) makes the Luminaire XP1 an exceptional machine, and one that is indeed, light years ahead. [youtube id="wzIyx4ljH6o"] At this show, Brother raised the bar and demonstrated that they are an industry leader. Now the question begs…

Good Things Come in Threes with the Innov-is NS1750D